Imagine that you have an array containing the names of all students in a class.

Since there are nine students, we will need to use nine statements to log all of their names.

The more students there are, the more statements we'll need. Imagine trying to log the names of every student in a school. There could be hundreds of students. This can become cumbersome so there has got to be a better way to do this.

A loop is a piece of code that runs a set of statements multiple times. Each run is called an iteration. There are two common types of loops in Apps Script.

A For loop is usually used to implement some type of counter in your program. In the above example, we used nine statements to print the names of students in a class.

The only change in every statement was the array index (0, 1, 2 … 8). Instead of using nine separate statements, you could have used just this one statement:

Here, counter is a variable whose value should start at 0 (first student) and should increase by 1 in each iteration until it reaches 8 (last student).

Here is how you'd implement this using a For loop.

Let's unpack how it works. A For loop has four steps.

Here is a flowchart diagram of the four steps in a For loop. 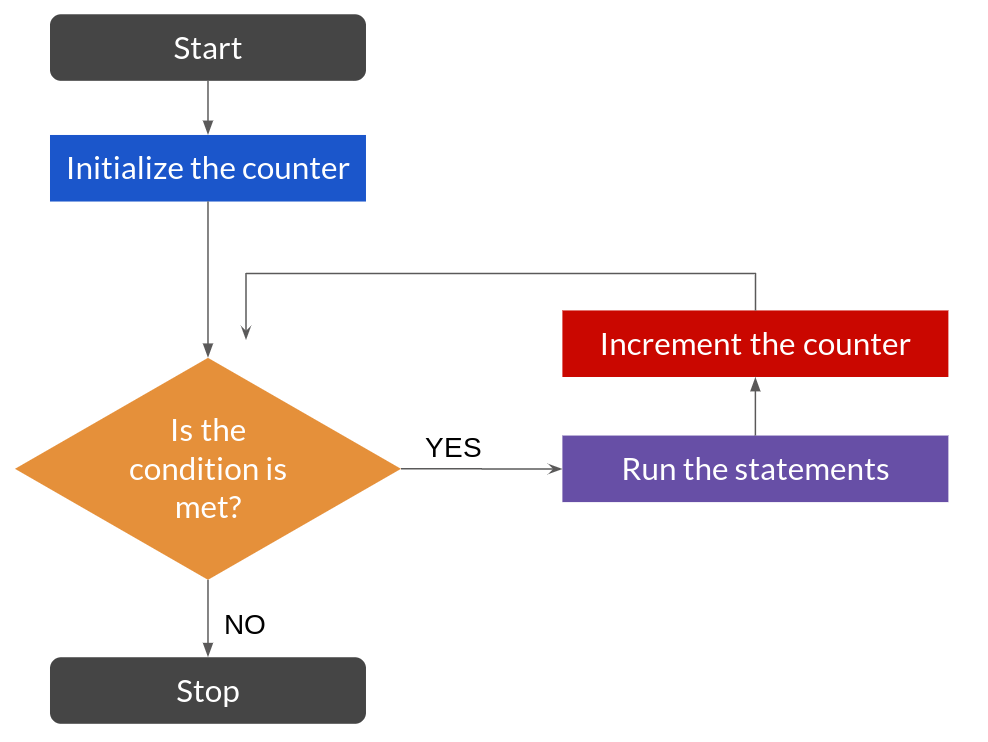 A step-by-step For loop example

The table below shows you how the following For loop works.

Imagine that you're writing a program to guess a secret number. Let's say that the secret number is 55. In every iteration, your program generates a number between 0 and 100. If this number is equal to 55, the program ends. Otherwise, it proceeds to the next iteration and guesses the next number.

It is hard to use a For loop here because you don't know how many guesses will be needed before your program correctly guesses 55. This is where a While loop becomes handy.

The code below shows you how to use a While loop. The code keeps guessing a number between 0 and 100 until it correctly guesses 55. It also uses the numGuesses variable to track how many guesses it took to guess the secret number correctly.

The structure of a While loop is simpler than a For loop. There are just two steps.

Here is a flow chart diagram of the steps in a While loop. 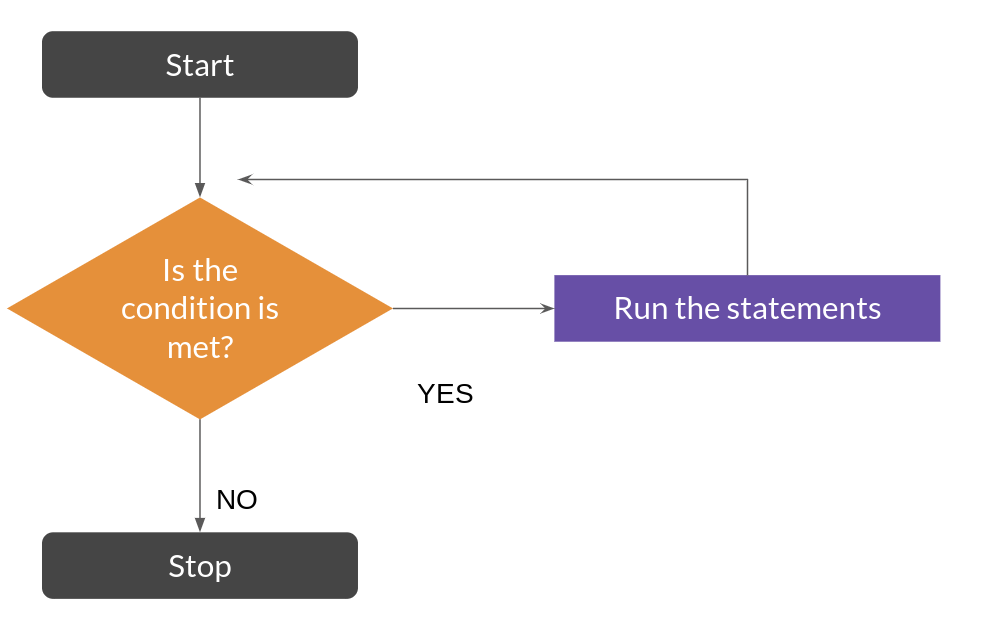 A step-by-step While loop example

The table below shows you how the following For loop works.

In the above example, it took 5 guesses for the program to correctly guess 55. If you run the program again, the number of guesses will likely be different. It is impossible to know the number of guesses in advance. What we do know in advance is when to stop. We know we should stop when we correctly guess the secret number. This is the difference between a For and While loop. Use a For loop if you know the number of iterations in advance. Use a While loop if you know when to stop based on some condition but you have no idea how many iterations it will take for this condition to be met.

The break and continue statements can be used to jump out of a loop or jump to the next iteration. The code within the loop after one of these statements will NOT be run.

The diagram below illustrates how these statements work with a While loop but they will also work with a For loop in the same way.