In many companies, these workflows are ad hoc and leverage emails, spreadsheets and manual processes. The result is an inefficient and error prone workflow which can cause expensive mistakes to occur. There is a better way to do this and that is through automation!

In this tutorial, I will show you how to build a simple expense report approval workflow using Google Forms, Google Sheets and Google Apps Script. You can customize the code in this tutorial based on your use case and needs.

This tutorial assumes that you are familiar with the following concepts:

If you're new to coding, I've written a detailed tutorial on learning to code using Google Sheets and Apps Script.

The first step is to create a Google Form that employees will use to submit expense reports. The form will require them to submit the following information: 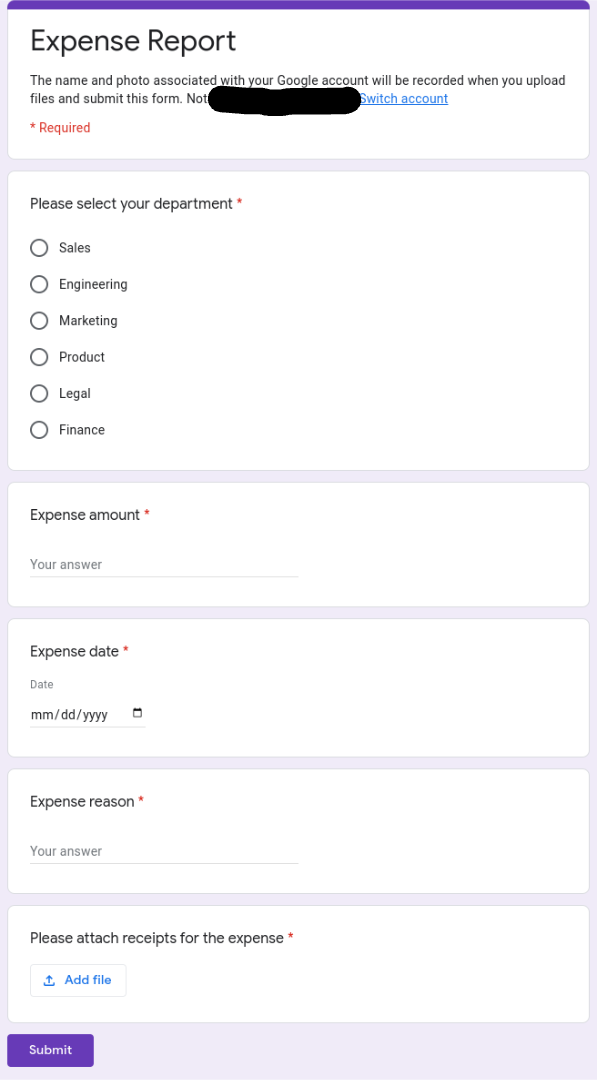 The video below will show you how to create the above form.

Step 2 — Link the Google Form to a Google Sheets spreadsheet

The next step is to link the Google Form to a Google Sheets spreadsheet where the responses will be stored.

Then configure the form to collect the email address of the person submitting the form. We will use this email address later in this tutorial to send notifications when the expense report is processed.

When you complete this step, you should have a Google Sheets spreadsheet containing columns that correspond to the fields in your form.

Step 3 — Confirm that the form is working correctly

Try submitting a few sample expense reports to confirm that these submissions are being recorded in your spreadsheet.

So far, we've successfully built the expense report submission form and we've tested that the information submitted via this form is captured correctly. Next, we need to build the approval workflow.

To further streamline the approval workflow, you can add Data Validation to the Approval status column so the decision maker can simply choose "Approved" or "Rejected" from a drop down menu.

At the end of step 4, we have a working form that employees can use to submit expense reports and a way for the designated approver to approve or reject each report. Next, we need to notify the person who submitted the expense report of the approver's decision.

We will use Apps Script to send out email notifications to employees when their expense report is processed.

I've written a detailed guide on sending email from Google Sheets using Apps Script. Please refer to that tutorial for detailed information on building rich applications using the power of spreadsheets and email.

Here is how this will work:

Step 5.1 — Open the script editor from the Google Sheets spreadsheet

Then replace the code in the editor with the code below and save the file.

I've added comments to the code so you can follow along and understand how it works. At a high-level, the code uses three functions.

When you are done, your script editor should have the above code in it:

Step 5.3 — Test your Apps Script by manually running your script from the Apps Script code editor

The next step is to run your script to test if it works correctly. To test your script, please follow the following steps:

The final step is to make it easy for the person approving expenses to send out email notifications. Having to open the Apps Script editor to run the script l can be cumbersome. We can simplify this by making it possible to run the script by clicking a drawing or an image in the Google Sheets spreadsheet. Please see the tutorial on Clickable buttons in Google Sheets for more information on this feature.

Step 6.1 — Insert a drawing in the Google Sheet that looks like a button

We will insert a Google Drawing and style it to look like a clickable button. I made the button noticeable by using a red background color.

The video below will demonstrate how to create a clickable button in Google Sheets using a Google Drawing.

You can also insert an image of a button instead of a Google Drawing.

Step 6.2 — Link the drawing to the sendEmailsAndUpdateStatus() function

The final step is to link the button you created to the Apps Script function sendEmailsAndUpdateStatus() that will send out email notifications.

In step 3, please only enter the name of the function. Please do not include the parentheses.

It's time to do an end-to-end test to confirm that everything works nicely together. Submit a new test expense entry using the Google Form and then test various scenarios to confirm that there are no bugs in your code or edge cases that we haven't considered.

The video below demonstrates how the expense approval process works.

In this tutorial, I showed you how easy it is to build an approval workflow using Google Forms, Google Sheets and a few lines of Apps Script code.