In a previous tutorial, I showed you how to build a navigation menu in Google Sheets using custom menus. The Apps Script code that we used in that tutorial defined a separate function for every menu item. And every one of these functions used the same business logic tosheet corresponding to the selected menu item.

There is a lot of repetitive code here. We're defining a number of functions that simply call a common function.

The question is is there a different way to do this? The answer is … yes! There is a way to find out which menu item was selected in a custom menu with a lot less code. However, before explaining how to do that, it is important to say this is really only an issue if you have several menu items in your custom menu. If you have fewer than 5 menu items, it may be better to use the above simpler approach of creating separate functions for each menu item.

This tutorial assumes that you're familiar with the following concepts:

What are we trying to accomplish?

We want to use a single function definition for multiple menu items in a custom menu. That is to say, we want a single handler function that we can attach to every menu item such that this function can figure out which menu item was selected.

Understanding the caller of a function

The key concept that we will be using in this tutorial is the caller of a function. Let us first understand what the "caller" of a function means. 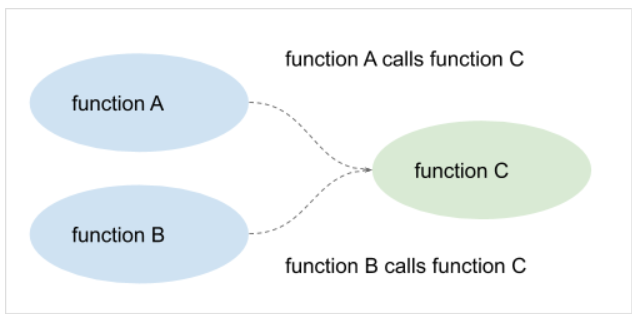 Within function C, you can access the function that called it by using the caller property: C.caller. Also, C.caller.name is the name of the caller function.

The code below demonstrates the concept of a function's caller.

When you run function A, it will call function C, which will then log the name and source code of its caller function A.

Similarly, when you run function B, it will call function C which will log the name and source code of itss caller function B.

Now, let's see what happens when we declare a variable D and assign the function C to it.

When you run the function D, function C will be run since the value of function D is C. Interestingly, the caller function here is actually an anonymous function that returns the function D.

We're able to figure out that function D led to calling function C from the source code of the caller function (i.e, from C.caller.toString()). Here, we did not define a separate function D. We simply created a variable D and assigned the function C to it.

Now, inside function C, we can use the string methods indexOf() and slice() to extract the name D from C.caller.toString().

We can now use the above approach to figure out which menu item was selected without defining separate functions for each menu item.

Here is a video that demonstrates this feature:

In this tutorial, I showed you how to figure out which menu item was selected in a custom menu without defining separate functions for each menu item. I also explained what the caller of a function is and how to apply this concept to the problem at hand.

We've effectively created a single "handler" function for all menu selections such that the handler can determine which menu item was selected. I've been trying to figure out how to do this for some time now and I finally came up with the above approach that seems to work well. If you know of a better way to do this, please do let me know using the form below.