The Monty Hall problem is a probability puzzle that became famous in 1990 because its solution is counterintuitive.

Suppose you're on a game show, and you're given the choice of three doors: Behind one door is a car; behind the others, goats. You pick a door, say No. 1, and the host, who knows what's behind the doors, opens another door, say No. 3, which has a goat. He then says to you, "Do you want to pick door No. 2?" Is it to your advantage to switch your choice?

If you were faced with this situation, what would you do? Will you stick to your choice or will you switch your choice?

In order to answer this question, you will need to find out which course of action will maximize your chances of winning the car. This, of course, assumes that you prefer winning a car to a goat but we'll leave that aside for now :).

There are multiple ways to solve this puzzle. For example, you could approach it like any other probability question and solve it mathematically. In this tutorial, I will show you how you can solve this puzzle using Google Sheets.

How to solve the Monty Hall problem using Google Sheets?

Many probability puzzles can be solved using simulations. Instead of solving the puzzle mathematically, you create a computer model that you can run repeatedly to understand the outcomes produced by various strategies.

In this case, to solve the Monty Hall problem using simulation, we will first need to build a model that will let us simulate what will happen for the following two strategies: (1) stick with our choice and (2) switch our choice.

I will show you how to create a model in Google Sheets for the Monty Hall problem and then run multiple simulations to determine which strategy is better. Should you stick with your initial choice or should you switch?

This tutorial assumes that you know the basics of Google Sheets (including how to use formulas). You don't need to know probability theory or any other complex concept!

4 steps to simulate the Monty Hall problem in Google Sheets

First we need to create a model in Google Sheets to represent the Monty Hall problem. Each row will represent a single simulation. A simulation is a single instance of the problem where you make a choice using each strategy and see if you win.

We'll use the following 5 columns to represent a single simulation:

The above model works in the following way:

Remember that once you pick a door, the host opens a door other than the one you picked that has a goat behind it. This means that ultimately the goat is either behind the door you originally picked or the remaining one that you can switch to.

When the values in columns B and C are not the same it means that the door you picked (column C) is not the door the car is behind (column B) and switching your choice is the correct move.

When you're done creating the above model, you should see a sheet like the one below.

The formulas corresponding to the above cells are as follows:

Row 2 represents a single simulation of the Monty Hall problem and columns D and E show you whether a specific strategy wins for this specific simulation. In the above illustration, switching your choice is the strategy that wins.

Since each row represents a simulation, all you need to do to run say 1000 simulations is fill the formulas to 1000 rows by using the fill handle.

In my spreadsheet, these values were as follows:

I also plotted these percentages as a function of the number of simulations and as you can see they converge over time. One thing that immediately stands out from the graph is that switching your choice is clearly the better strategy and will result in you winning the car roughly two thirds of the time. 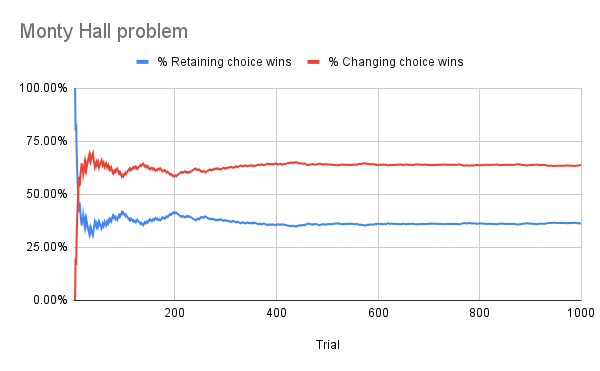 Step 4 — Determine the winning strategy for the Monty Hall problem

Therefore, to maximize your odds of winning the car, you should switch your choice.

In this tutorial, I showed you how to use Google Sheets to run simulations and solve the famous Monty Hall problem without using any probability theory!

Whenever you're faced with a business problem involving chance, consider using simulations to determine the optimal strategy to pursue. Using Google Sheets, you can build a model to represent the problem at hand and then quickly run several simulations to figure out which strategy to pursue. The best part is you don't have to know detailed probability theory to determine the right course of action.