Triggers are a feature in Google Apps Script and they enable you to automate your tasks and workflows in Google Sheets.

For example, if you want a metrics report emailed to your boss every morning, you can use a Time-driven trigger along with some Apps Script code to automate sending this report.

In this article, you'll learn more about triggers, how they work and how to create them.

How do triggers in Google Sheets work?

The best way to understand how triggers work is to look at an example.

Suppose you're like me and you tend to forget the birthdays of your friends and relatives. You make a new year resolution to remember birthdays and you decide to use your spreadsheet skills to help you keep your resolution.

You enter all the birthdays you want to remember into a spreadsheet and then use a trigger to check it every morning at 6AM and send you an email if it is someone's birthday.

From a technical standpoint what is happening is that the trigger causes a Google Apps Script function to run every morning and this function reads the birthdays from the spreadsheet and sends you an email if that day happens to be someone's birthday.

Types of triggers in Google Sheets

There are two types of triggers in Google Sheets. They are: Time-driven triggers and Spreadsheet triggers.

Use Time-driven triggers to run a function in your script periodically OR at a specific date and time in the future. Here are some examples of use cases where you might use a Time-based trigger:

If you have an engineering background, a Time-driven trigger is similar to a CRON job.

There are six types of Time-based triggers

Use this option to run a function in your script at a specific date and time in the future. You must specify the date and time in the YYYY-MM-DD HH:MM format and in the GMT-07:00 timezone (which is the Pacific Daylight Time or PDT). Also, the hours and minutes must be specified using the 24-hour clock.

Use this option to select the day of the week and the time interval on that day when a function in your script should be run. For example, you can make it run every Monday between 8am and 9am.

Use this option to select the day of the month and the time interval on that day when a function in your script should be run. For example, you can make it run on the 5th of every month between midnight and 1am.

How to run your script only on the last day of every month?

Suppose you want to send your team a monthly report on the last day of every month, how do you set this up? The first step is straightforward, you'd write a script to create and send the email report. The next step is to automate running this script using a trigger. This isn't as straightforward as you'd think it would be.

You can't use a Month timer in this scenario because different months end on different dates. Some months have 30 days, others have 31 days and February has 28 days in a regular year and 29 days in a leap year.

One way to do this is by setting up a Day trigger that will run your script every day. Then in your script, include some logic to check if that day is the last day of a month

There are two kinds of Spreadsheet triggers: Simple triggers and Installable triggers.

Simple triggers do not need user authorization but installable triggers must be authorized (i.e., installed) by the user.

Since simple triggers are run without user authorization, Google restricts what scripts can do when they are run by these triggers. Some of these restrictions are:

Installable triggers can access user data but they must be authorized by the user.

Use an open trigger to run a function in your script when the spreadsheet is opened. While Google Sheets supports an installable version of the Open trigger, the simple version is more commonly used.

A common use case for Open triggers is adding a custom menu in a Google Sheets spreadsheet.

Use an Edit trigger to run a function in your script whenever one or more cells in your spreadsheet are edited.

Depending on your use case, you must pick either a Simple Edit trigger or an Installable one. Here are a few guidelines to help you pick the right type for your use case:

Use a Change trigger to run a function in your script whenever the structure of your spreadsheet changes. Here are some examples of structural changes that will result in this trigger being fired:

Change triggers are only available as an Installable trigger. Unlike the Open and Edit triggers, there is no Simple Change trigger. The user must authorize the trigger before it can be used.

Here is an example use case where a Change trigger can be used: Suppose your team maintains an important financial model in a spreadsheet. You want to be notified whenever any structural changes are made to that spreadsheet so you can validate that the model still works correctly. You can set up a Change trigger to run an Apps Script function whenever structural changes are made to the spreadsheet and this function will then send you an email notification.

Use a Form submit trigger to run a function in your script whenever a user submits a Form that is linked to your spreadsheet.

A very common use case for a Form submit trigger is sending yourself or your team an email with the contents of the Form submission.

How to create a trigger?

Creating a simple trigger (Open or Edit or Selection change)

Remember that there are a number of security related restrictions placed on Simple triggers. So if your simple trigger does not work you should check if your function is trying to do something that requires user authorization. You can always use an installable version of an Open or Edit trigger if your code needs access to user data.

Here is an example of how to create a Simple Open trigger that creates a custom menu called "Admin Settings" whenever the spreadsheet is opened.

You can create installable triggers using code or via a UI.

Creating Installable triggers via the UI

Step 1 — Click the Clock icon to open the UI for creating triggers.

Step 3 — Configure the trigger and click Save to create it 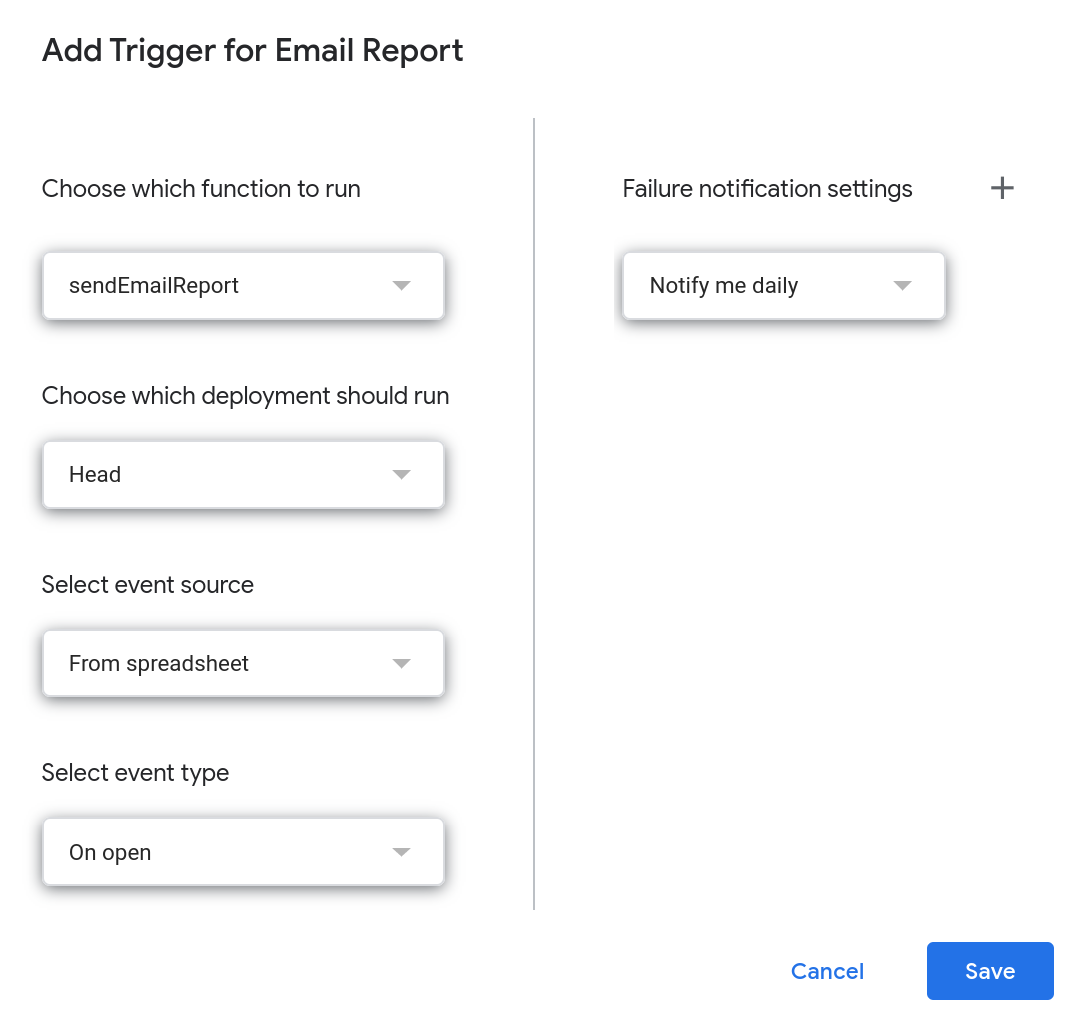 To configure your trigger, you need to select a few options:

Step 4 — That's it! Your shiny new trigger will be listed on the Triggers page

In the above screenshot, I've configured an On edit trigger that will run the sendEmailReport function whenever the spreadsheet is edited.

You can navigate to this page from your script by clicking the clock icon (see Step 1).

To create an installable trigger using code, you need to write a function that will create your trigger and then run in manually from the script editor.

For example, to create an Edit trigger that will run the sendEmailReport function whenever your spreadsheet is edited, you need to: 1) Create a function that will set up this trigger and 2) Run this function manually from the script editor by clicking on the play icon.

Step 2 — Run this function manually to create the trigger

Select the createOnEditTrigger function from the dropdown menu and click on the play icon to create the trigger.

If you click run the createOnEditTrigger function three times, you'll end up creating three edit triggers instead of just one! This is not good because all three triggers will fire when your spreadsheet is edited and your sendEmailReport function will be run three times resulting in multiple emails being sent ☹️.

To prevent this, either check the Triggers page manually to confirm that you've only created one trigger OR modify your code to only create a new trigger if it hasn't already been created.

Sample code for creating the various types of installable triggers

Below are links to the official documentation where Google has provided code samples that show you how to create the various types of installable triggers.

How to set the correct timezone in your Time-driven trigger?

Use inTimezone("<timezone>") to set the correct timezone while creating the trigger. See the official documentation for an example of how to do this.

The Event object in a trigger

Perhaps you only care about edits to column A your spreadsheet. In this example, your function can use the range information passed to it via the event object to check which columns were edited.

The properties of the event object will vary depending on the type of trigger that fired. You can learn more about these properties in the official Apps Script documentation:

Restrictions that you should be aware of when creating triggers

For security reasons, Google restricts what scripts can and cannot do when run by a trigger. These restrictions are different for Simple and Installable triggers.

Restrictions that apply to both Simple and Installable triggers

Additional restrictions that only apply to Simple Triggers

Additional restrictions that only apply to Installable Triggers

This article introduced you to Triggers in Google Sheets. Here is a summary of