A named range is a feature in Google Sheets that lets you give a range a range a unique name. This is a very useful feature since you can use the name of range in formulas and functions instead of using its A1 notation.

For example, if you have a spreadsheet that you use for budgeting, you might have two named ranges called Expenses and Income. You can then reference these ranges in formulas and functions by using their name. So instead of =SUM(Sheet2!A3:A17), you can use =SUM(Income). Using names for ranges instead of their A1 notation makes formulas and Apps Script code easier to understand.

★ Naming ranges is a best practice that you should follow

Giving variables a meaningful descriptive name is a best practice in coding. Doing so helps others read and understand your code. Similarly, you can think of a range in a spreadsheet as a variable that references an array of data. Therefore, it is a best practice to assign names to ranges that get used in multiple places in your spreadsheet. Then, use these names in formulas and scripts in place of their A1 notation.

This tutorial will assume that you are familiar with:

Why should you use named ranges in Google Sheets?

There are several benefits to giving meaningful names to ranges in your spreadsheet.

How to create a named range in Google Sheets?

There are two ways to create a named range: (1) manually using the Google Sheets UI and (2) using Apps Script code.

There are two ways to create a named range using the Google Sheets UI:

1. Select a range, right click and select Define named range. Then enter a name for this range and select Done.

2. Select Data —> Named ranges from the menu. Then create the named range from the sidebar by entering a name and selecting the range.

In the screenshot below, two ranges have been selected. Google Sheets currently does not support assigning a single name to a list of ranges.

According to Google's documentation, the following restrictions apply to names of ranges.

When you enter a name that is not valid, the UI will warn you. 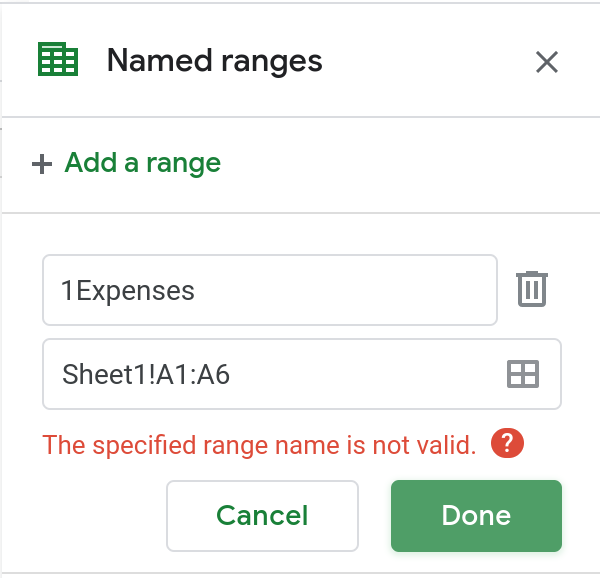 To create a named range using Apps Script, use the setNamedRange() method of the Spreadsheet object. The method takes two arguments as input: (1) the name of the range (2) the range itself.

Running the above function will create a named range called "Expenses" that is a reference to the range Sheet1!A1:B5.

How to use a named range in a Google Sheets formula?

Using a named range in a formula is straightforward. Just use the name instead of specifying the range's A1 notation. For example, instead of =SUM(Sheet1!A1:B5), use =SUM(Expenses) instead.

The code below writes the two-dimensional array dataToBeWritten into the range named StudentGrades.

You can use named ranges as arguments when calling a custom function from a cell in your spreadsheet. However, when you do this, the function will never know that it was passed a named range. Instead, it will directly receive the data that is contained in the named range that was passed to it as an argument.

Now, let's write a custom function called STRINGIFY() that returns the JSON string representation of the argument that is passed to it.

When you call the function STRINGIFY() with the named range SixValues as the argument, you'll see that the value returned is the string representation of the two-dimensional array of values contained in the range Sheet8!A1:A6. The function STRINGIFY does not know that you called it with a named range or even a range. It only sees the values in the range that you passed as an argument to it.

Reading all the named ranges in a Google Sheets spreadsheet

To read all the named ranges that have been defined in your spreadsheet, use the getNamedRanges() method of the Spreadsheet object.

The logNamedRanges() function below, reads all the named ranges in the spreadsheet and logs their name, the name of the sheet that contains the range and the range's A1 notation.

In this tutorial, you learned about named ranges in Google Sheets.